For several years the 151st Street Church of Christ had dreamed of planting a new congregation somewhere in the Kansas City area. Eventually, the dream became a plan and then a work in progress. 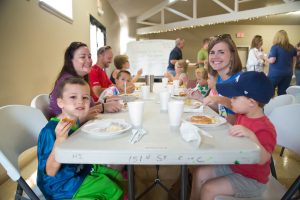 In the Fall of 2016, Joe Brumfield was hired to lead the development and planting of the congregation that is known as Southpoint.

The SOUTHPOINT CHURCH OF CHRIST began transitioning towards being a fully independent congregation by meeting for Sunday worship in our fellowship hall in the summer of 2017. Since September 17, 2017, Southpoint worships as an autonomous congregation and met at the Martin City Elementary School, 201 E. 133rd Street, Kansas City, MO, 64145. As of April 1, 2018, the congregation has become the Southpoint Church of Christ on Red Bridge Road, and has a permanent home at 101 W. Red Bridge Road, Kansas City, Missouri.

For additional information about the SouthPoint Church of Christ, contact Joe Brumfield at 417-655-0579 or joebrumfield@southpointcofc.com.